“Everyone has their own personal mountains to climb. We never know what is around the corner” Charlie Bird said after his global Croagh Patrick fundraiser. Charlie’s journey has been amazing and when he spoke that night on The Late Late about his dream to climb the Reek, something tingled inside Andy Walsh’s body, but it wasn’t one of his usual MS Sensory symptoms, this was something different.

In March 2020, Andy was diagnosed with Multiple Sclerosis and a journey began, alongside a world that was just getting to grips with the Coronavirus pandemic, he began to climb his own personal mountain.

MS affects over 2.5 million people worldwide. It has no known cause or cure. Attacking the central nervous system, its symptoms can include loss of balance and mobility through to paralysis, blurred vision, poor coordination, slurred speech, tremors, numbness, problems with memory and concentration, and extreme fatigue.

'Having a progressive illness is a great motivator, because you want to do things while you can.'

When Andy was first diagnosed he struggled to find someone to say to him, "It might not be as bad as some people say", his life took a dramatic twist over the next few months from going from having a very active lifestyle which consisted of coaching underage GAA and soccer, a busy job and his involvement in the Motorsport scene in Ireland to losing power in his right leg and being unable to walk.

“My life came to a sudden halt, looking back now when I came home from hospital the world was on lockdown, this actually helped me, cause I was staring a four walls unable to do anything, but I wasn’t missing out as COVID had put the brakes on everything that had previously taken up my time, from work to sports and pastimes.

MS will take you for a ride, but it is still possible to live a full life. With all the medications available to treat Multiple Sclerosis, it's important to find the one that's right for you, and to tailor your lifestyle to suit.” 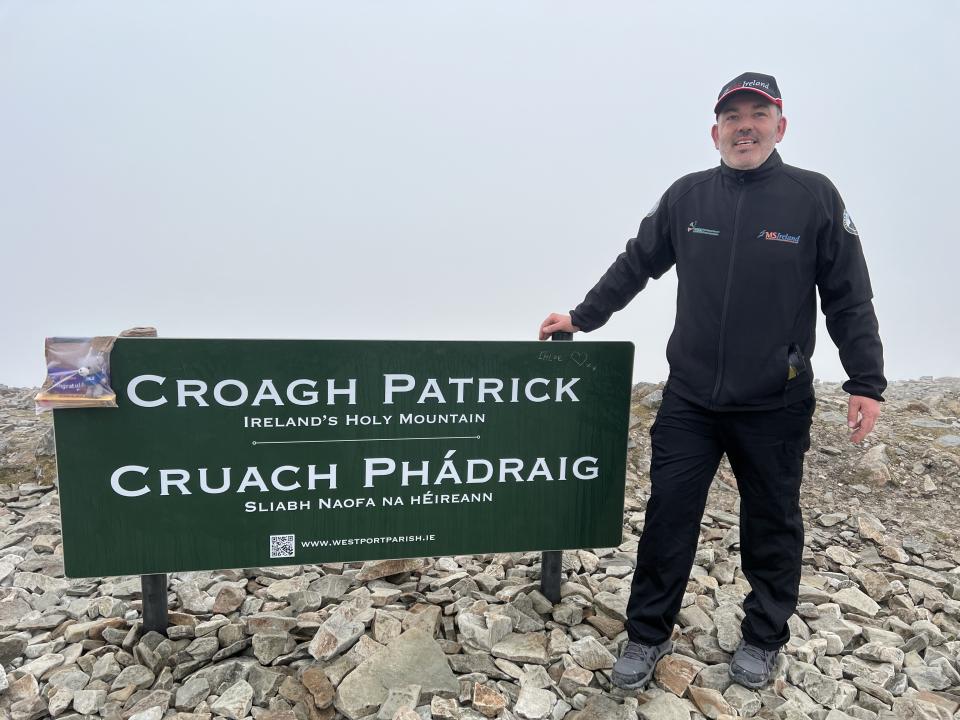 “Persistence was the key to help me make the necessary changes; I utilised the help and support that MS Ireland offered online,  I exercised and worked out no matter how bad I felt. If I couldn’t walk, I lifted weights. I found myself having more energy and my MS symptoms improved,”

“During my early stages I had a conversation with a consultant who enquired about how my house was equipped for wheelchair use, had I a downstairs bedroom and bathroom? Had I a ramp to my front door? This was something that I simply just wasn’t ready for and thankfully since I started my treatment I have gotten my life back. I’m on Tysabri, which is a disease modifying drug (DMD) for active Relapsing Remitting MS (RRMS), Tysabri is an intravenous infusion (drip) that I take once every four weeks to reduce the number of relapses.”

“I truly believe in order for us to cope, we have to take things one small step at a time and be patient with ourselves,” says Andy. “Climbing mountains is a slow process. Getting beyond a diagnosis of something like multiple sclerosis is a slow process, but when I saw what Charlie Bird was attempting I simply had to join him, not just for myself but for everyone out there who encounters something that throws them off course, so don’t define yourself by what you can’t do, define yourself by what you want to do, and keep moving forward.”

“A friend said “you’re inspiring” - but I’m not. I am ambitious. I ‘Climbed with Charlie’ to help raise awareness, and while Charlie captured the hearts of a nation I wanted to let ‘Andy Walsh’ of March 2020 know that it might not be as bad as people say”

Charlie Bird wasn’t the only person who cried tears of joy after the climb as an emotional Andy announced that his fundraiser collected over €17000 for both MS Ireland and Irish Motor Neuron Association.